In this example, we define the structure and behavior of an automated teller machine (ATM) in a UML model and validate the model’s functional correctness by defining and executing test cases.

For withdrawing money from an ATM system, the client puts his card into the ATM and enters the PIN of the card, as well as the amount of money that should be withdrawn from the client’s bank account. The ATM system then checks whether the entered PIN is valid and whether the withdrawal is possible, i.e., whether the balance of the client’s bank account exceeds the amount of money to be withdrawn. If the withdrawal is possible, the balance of the account is accordingly updated.

The class diagram defining the structure of the ATM system is depicted in Figure 1. It defines several classes: Card, Account, ATM, Transaction, Record, Deposit, and Withdrawal. The class Card owns two Integer attributes number and pin and is associated with the class Account, which owns two Integer attributes number and balance. The described withdrawal functionality is defined by the operation withdraw() of the class ATM, the operation validatePin() of the class Card, as well as the operation makeWithdrawal() of the class Account. The activities defining the behavior of these three operations are depicted in Figure 2 (ATM::withdraw()), Figure 3 (Card::validatePin()), and Figure 4 (Account::makeWithdrawal()).

The activity Card.ValidatePin (Figure 3) defines the behavior of operation Card::validatePin() and checks whether the pin stored on the card matches the provided pin. If this is the case, true is provided as output, otherwise false is provided. If the call of the operation Card::validatePin() provides false as output, the activity ATM.Withdraw also provides false as output indicating an unsuccessful withdrawal. Otherwise, the withdrawal is carried out by calling the operation Account::makeWithdrawal() (Figure 2 action makeWithdrawal) for the account associated with the provided card whose behavior is defined by the activity Account.MakeWithdrawal. 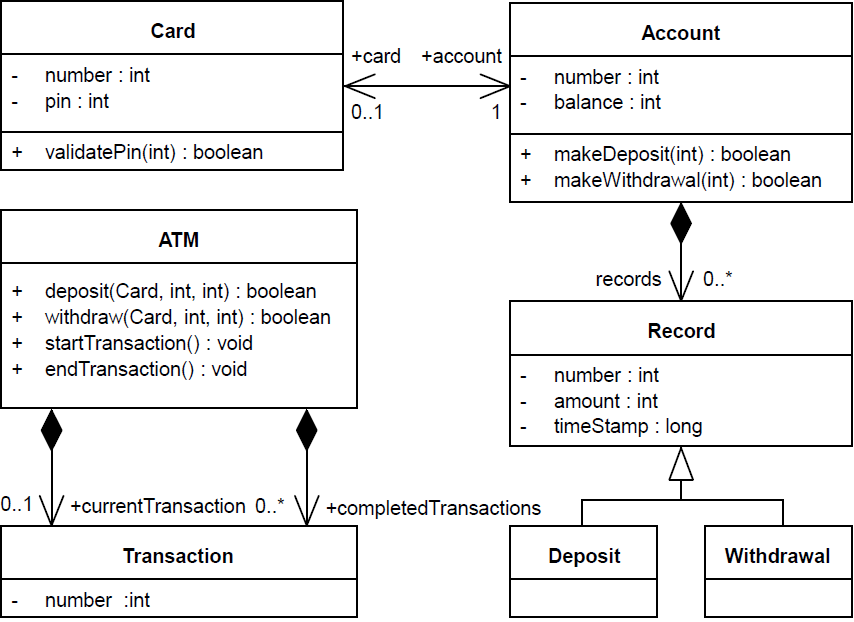 To validate the correct behavior of the activity ATM.Withdraw, we defined the test suite depicted in Listing 1.

Test case 1 atmTransactionTest is used for testing that if the correct pin is provided and the amount of money to be withdrawn does not exceed the balance of the associated account, the balance is accordingly updated and true is provided as output indicating a successful withdrawal. Further, it checks whether the pin is validated before the account is updated.

The test case defines the activity ATM.Withdraw as activity under test. The object atmTD is defined as context object (i.e., the activity shall be executed for this object). As input the object cardTD defined in the test scenario as well as the Integer values 1985 and 100 are provided for the parameters card, pin, and amount. The test case consists of one execution order assertion and two state assertions.

After executing the test cases defined in Listing 1, the framework returns the test results depicted in Listing 3. As can be seen from the results of the order assertions (lines 6-20 and 36-50), it is possible that the action validatePin is executed after the action makeWithdrawal. This is possible because a decision node is missing in the activity ATM.Withdraw that checks whether the pin is valid and only triggers the execution of the withdrawal in this case. The necessary corrections of the activity are presented in Figure 5.
Listing 3: Test results for ATM.Withdraw